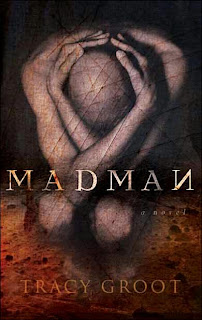 Now, before you run because of the word "Christian", I must encourage you to stop and take this all in stride. Madman is singularly better than most Christian Fiction (although not as good as The Mark of the Lion series by Francine Rivers) and tells the story of the demoniac of the Decapolis, telling the traditional Biblical text in the form of a gripping thriller.
Madman is well-researched, interestingly told, and gripping in the best literary sense. The writing style is a little choppy sometimes- Groot has an affinity for sentence fragments- but it adds to the thrill and emotion of the story. The plotlines behind the actual story are really fascinating, and it is enthralling to piece together each character's back story and relation to the other characters. Little pieces of evidence are revealed all along the way, and only at the last do you understand fully.
Following the story of a Greek servant named Tallis investigating the disappearance of an Academy of Socrates in the Greco-Roman city of Hippos, Madman begins in the tiny Palestinian village of el-Kursi, the location of the feared madman. Tallis finds that the academy is not only defunct, it disappeared nearly three years before, along with all the teachers that had been personally appointed by his beloved master in Athens, Callimachus. The plot thickens: not only is the school gone, no one in Hippos is willing to admit that it ever existed. Through a slave that he pays dearly, he finds out what happened to four of the teachers: one was murdered in a grisly fashion, another committed suicide, another is a priestess in the temple of the god Dionysus (Bacchus), and the fourth is the legendary madman of Kursi.
As the story progresses, you discover Tallis' terror and fury toward the cult of Dionysus, and through his memories, discovering the deep darkness behind the happy mask of the god of wine and debauchery. Instead of ignoring the Greco-Roman culture like so many Christian novels, Groot uses all of the Greek names for the cities of the Decapolis- Scythopolis for Beth Shean, Hippos for Annaba, Kursi for Golan Heights (although the village is still called Kursi). She uses Dionysus instead of Bacchus, his more Romanized name, as well. Staying with the view of her characters, Rome is barely ever viewed as the center of the intellectual world- Athens still holds that title, at least in Tallis' and Polonus' minds. She also acknowledges the difficulties between the Parthians and the Romans of the time, often mentioning the band of Shamash Eriba as a difficulty to travelers in the area.
Most of the book is purely fiction, a story about Tallis and his fear of madness and the Maenads (nurses of Dionysus). At the end, the story in the Biblical canon is told in breathtaking fashion, inside the mind and soul of the madman. I have never heard a story told so personally, terrifyingly, or touching as that.
Madman is honestly one of my favorite books. I fell a little bit in love with Tallis, picturing his cheerful face with the gap in his teeth, smiling and telling jokes between the disasters of the book. Getting to know his heart and mind is honestly one of the best parts of the book. It drags a little in the middle of the book, while Tallis is waiting for his Forum for Truth to meet, but it picks up speed from there until the end. Several of the characters are really hard to understand- Polonus, Bek, and Samir especially- but that tracks with the story fairly well in the end. Though not nearly as touching and tear-inducing as Beauty, I've read this book plenty of times. Groot's use of the culture of the time, the languages, the attitude toward philosophy, and the overcoming of madness are truly enthralling, and rare amongst Christian writers.
"Quandocumque impellunt, repelle- when they push, you push back. They can't take anything that you don't surrender." --Tallis
Posted by Unknown at 4:02 PM