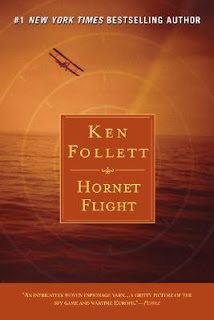 Ken Follett has done it again.
Whether you're an avid Starz fan or a voracious historical fiction reader like me, you know the compelling story of Pillars of the Earth, and many readers now know Fall of Giants. Ken Follett has proved himself a master of the genre, inventing compelling characters and throwing them into the heart of some of history's greatest moments. Hornet Flight is no exception.
The story of a young Danish boy, Harald Olufsen, intertwines with the pulse-pounding stories of the great spies of war-torn Europe. As in all of Follett's novels, you can never quite tell what twists and turns the story will take, and it leads to delightful, horrifying, compelling moments in the years that shocked the world.
Flight depicts the British/German spy game and how it really affected the fighting. In the prologue of the book, the final gambit is revealed: if the British don't find out how the Germans are detecting their planes, they'll lose the war. So from the earliest moments of the book, we are introduced to those in power, and in the next chapter, we meet those under the regime. The small country of Denmark is rarely ever talked about in history books, let alone in exciting novels; so the idea of reading about the people during that time period had me from the beginning.
Harald is a compellingly ordinary character, which is somehow attractive. He seems so traditional- the son of a preacher, a schoolboy, and a little rebellious- but after the points in the plot develop, he becomes so real that I can almost picture his blonde head walking through the crowds on the street. Plus, his peat-burning motorbike is so stinkin' cool, it's not fair.
I've always admired Follett's ability to create villains; Peter Flemming is no exception. He is incredibly complex; almost a modern Javert- a man obsessed with justice because of the lack of justice in his own life. His wife was permanently mentally damaged due to an automobile accident, and there is no recovery. As an officer of the law, we see him fall throughout the book, and justice finally prevails, but  I can't share too many of the details without spoiling the book entirely.
Arne and Hermia are my favorite, in short. :) Hermia is an absolutely fascinating character as well, with her passions unrestrained, but we cannot tell where her most powerful passion lies. It's an interesting character study.
Follett's character development is absolutely impeccable. Even in a far-removed era like Pillars, he makes Philip real enough to touch; but in a time much closer to our own, he makes every detail of his people real enough to draw breath. Fantastically researched, infallibly written, and compelling, Flight is a gritty, bittersweet tribute to the gains and losses that we all suffer in times of trial.
I managed to get away with Hornet Flight for five dollars from Barnes and Noble's sale rack, and because the books is almost ten years old now, you'll probably be able to find it for cheap on Amazon or eBooks. Either way, it's absolutely worth a read if you can get your hands on it. If not, get it from the library, but it's definitely worth a read. Don't pass it up, if you can.
That's all for me, for a bit. I have some catching up to do. Read on, my pageturners.
Posted by Unknown at 11:27 AM