The Marks of Cain 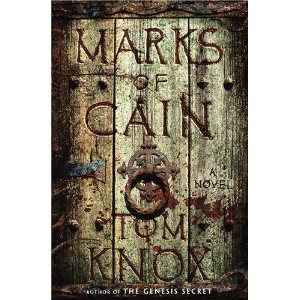 Mr. Knox, you're a thief. Give me back those four hours of my life that you sucked into this abysmal collection of words.
Although pseudonyms are largely out of date and pretentious, Tom Knox is the pen name of one Sean Thomas, who has earned some repute in the world of fiction for his thriller The Genesis Secret. Jeff Abbott, author of Panic, lauded his newest novel, The Marks of Cain, as "the new Da Vinci Code" for its taboo usage of the unexplained mysteries of the Bible and Christianity.
I don't know where Mr. Abbott gets off.
The story of  The Marks of Cain centers around two characters (which seems to be a trademark of the thriller world these days), David Martinez and Simon Quinn. Quinn unsheathes his entire life story to us in the first three pages, complete with insane brother and absentee father, conveniently attending a new Narcotics Anonymous meeting. A few more chapters in, we meet David, who is bequeathed two million dollars by his mysterious dying grandfather, available on one condition("The Ultimate Gift", anyone?)-- that he investigates the locations of several old churches on an antique map. He flies to the Basque lands in Spain and dives into a mystery much older than him, becoming involved with many dangerous characters, including a terrorist named "The Wolf."
If you're not already bored from reading the summary, I'm either proud of you or amazed that you haven't seen any of the Indiana Jones movies. I'm not sure where Knox came up with his plot line, but it feels like an incredibly cliche mix of bad action movie and overly bloody thriller. He clearly takes pleasure in describing to us an obscure kind of torture called "knotting"-- but I won't spoil the sadistic joys of that to you in this review. Suffice it to say that I had to stop drinking my coffee.
The grisly, messy parts of this book are the only well-written parts, though. The rest is more painful than pulling teeth-- so many fragments of sentences yank us back and forth, incredibly stupid and superficial thoughts cloud the characters, and the dialogue is filled with a few thousand elipses... need I go on? Every character seems to be a pinball post to bounce more danger and blood off of, and very little psychology happens behind their glazed-over eyes. Even the two main characters, so grievously burdened with cliche baggage, are uninteresting after the first few pages.
Amy is the epitome of useless, irritating, annoying action-thriller-mystery female, and her mystery melts away a chapter after she is introduced. Knox has a horrible habit of exposing everyone's life story mere seconds after we make their acquaintance, which is an oddly ironic characteristic for someone whose books hinge on suspense. It's almost like that drunk guy at the party who latches onto you and shares with you every moment since he was fifteen without you ever asking.
Even if you are the most patient reader, this book peters out after the first few chapters. The proliferation of awkward language and phrases is only accented by Knox's attempt to colloquialize the dialogue by making the characters swear, and instead of making them human and real, it makes them sound like a low-budget writer was up at midnight before his screenplay was done.
The only quasi-interesting part of this travesty is the exposition of Basque culture. They are one of the oldest, longest-surviving natives in Europe, still speaking their own language and retaining much of their history themselves. They inhabit a very specific region of the world rather quietly, and they deserve a much better novel than the one that was inflicted upon them.
Do NOT waste your time on this book. If you wish to purchase it for some strange, unidentifiable reason, you can get it on the Kindle for $9.99, or if you have WAY  too much money, it's listed for $26.95. As I said, it's not worth reading, so if you purchase it, I wash my hands of your wallet.
Anyway, keep your eyes out for literature like this. It makes you feel like an extremely good writer.
Posted by Unknown at 2:59 PM