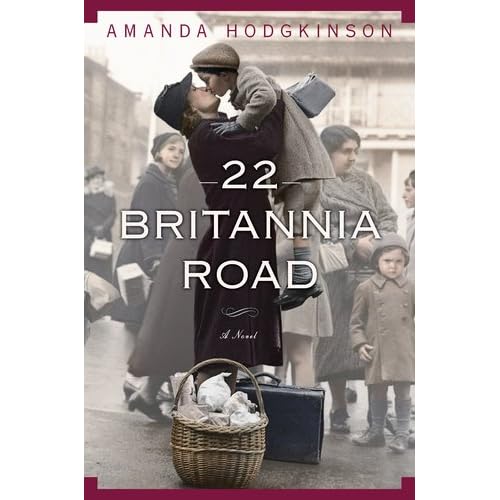 Even when things end, they never really do. As long as there is one person alive who remembers what happened, it will never end. It will go on in their mind, their memories, who they are. It's changed them.
Unlike so many books about the effects of World War II, 22 Brittania Road offers an achingly intimate picture of the true tragedy of the war: the terror that it inflicted on its victims. Amanda Hodgkinson's debut novel quietly but firmly forces us to look at the true consequences of our actions and the choices that we make every day of our lives.
The novel follows the story of Silvana, Janusz, and Aurek Nowak, a family of Polish-British immigrants who have been separated for six years by the war. Janusz has brought Silvana and their son to Ipswich to live in the eponymous house, trying to make a new life, picking up the pieces where they left off in pre-war Warsaw. However, Silvana is changed after hiding in the forest for six years, and Aurek is a wild child who thinks of his father as "the enemy" who threatens to take away his mother's love.
The book chronicles the deeply personal tale of recovery, pain, and change that follows any significant event, and the reconciliation of a broken family. Aurek slowly and hesitantly comes to trust Janusz as Silvana discovers that he is not the same man who left her with a baby in Warsaw. The entrance of a rival for her affections doesn't help the situation, and she must decide whether the past is worth a miserable present.
Written in incredibly simple but honest language, 22 Brittania Road touches on a subject that many authors fail to address: the question of what now? How do you just pick up the broom again after the windows have been blown in by a bomb? How do you clean out the stove after someone close to you dies? How do you just go on as you did before? The unhappy truth comes out in bits as the book progresses, and we watch Silvana and Janusz change to become people that can be together after so much time and separation.
Each person has their own separate tale of woe, loss, and inner struggle, and none is more pathetic than Tony Benetoni, the father of Aurek's young friend Peter, who lost his wife some years before the novel occurs and cannot help but try to replace her love with everything else. Silvana relates to him, and as the end of the book approaches, the veil is lifted aside, and we see how hard they've both tried to hide their pain and how much pain hiding it has caused.
Ms. Hodgkinson has clearly put a lot of time and love into this book, and it shows in the depth of thought and vivid, piercingly ordinary scenes. However, it is definitely a first novel: the chapters are somewhat muddled, with the storyteller constantly changing without warning. The places are indicated at the head of each section, but the time is not, and with the constant flashbacks to Janusz and Silvana's pasts, we're constantly confused and hunting for a clue as to what year it is. Usually, the titles of Poland, Ipswich, or France give us hints, but it would have been incredibly helpful to indicate the year just under the character's name.
There is also a lot of "She thought... she did... she wanted..." sentences in this book, which is not a grievous error, but is somewhat annoying after a bit.
But on the whole, the book redeems itself with such an understated but painful storyline. The characters are so hurt that you just want to give them a hug by the end to tell them that everything is going to be okay, and that the war is over. Certainly, the war inside each of them is neverending as they struggle to cope with peace.
22 Brittania Road is a deeply personal exploration of pain, and absolutely worth your time. It's still pretty new, so you can pick it up for $12.99 at the Kindle store or the paperback from Barnes and Noble for $15.85.
Posted by Unknown at 6:26 PM