The Emperor of All Maladies 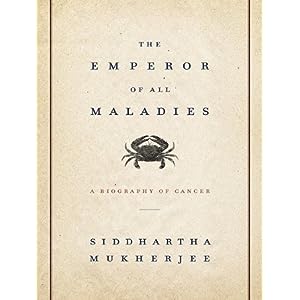 When you believe that you know someone well, you can look into their eyes and understand what it is they're going to think, say, and do. You know what buttons to push to make them mad, and what stirs their passions and makes them angry. You understand them, and even if they confuse you, you know who and what they are.
Siddhartha Mukherjee describes his Pulitzer Prize-winning work in the foreword as a biography rather than a documentary because of the way that cancer behaves: more like a malicious, unpredictable person than a disease. The more we get to know it, the more it becomes an enigma, a presence, a personality. The Emperor of All Maladies (quite possibly the most fascinating and useful title I've ever heard for a book) reads like a morose biography, chronicling the 4000 year life of something that kills.
Cancer itself is a dark word in our culture, and doctors are the Spanish Inquisition in white coats. We intrinsically fear them because being in the presence of one means illness. Mukherjee, an oncologist from Boston, is acutely aware of the patient side of the medical process-- before the first chapter, he gives the projected mortality rate for cancer in 2010. At regular intervals in the book, he reminds us how unpredictable, volatile, and fragile our health is; at the slightest provocation, we can erupt into broken chains that lead us to death.
Mukherjee reminds us over and over of his deep connection to his patients, beginning and ending the story with cases of those cancer patients who have changed his profession. Weaving them neatly into the long tale of the disease, he moves back and forth from the overall clinical diagnosis of the pathology of cancer and the human face of it. Despite the thick medical terminology and complicated concepts, we never stray far from the real cost of medicine, chemotherapy, cancer wards, and cures.
On the note of medical terminology, Mukherjee's writing talent shines. Even the most medically inept layperson soon becomes familiar with words like metastasize, benign, leukemia, and remission; acronyms like ALL, VAMP, MOPP, and NCA are all distinct, organized, and used at appropriate intervals. The author's care for his readers shows clearly; despite the fact that he is obviously outstandingly intelligent, he never leaves his audience in the dust of his very complicated, convoluted topic.
This book is not excessively linear, although it does follow a central plot-- the development of modern cancer therapy. The history that Mukerjee follows is fascinating and well-organized, the pieces placed together in both systemic studies and chronological, committing to both the logical and psychotic behavior of cancer. Each scientist that we meet spends his life and career desperately trying to understand the disease eating their patients alive, and each one dies with one piece of the puzzle, trying to save just one life. And sometimes, they succeed in great flashes of genius, and sometimes, they save a few patients.
Understanding the disease of our time is crucial. This book is an excellent documentation of the plague that is merely "a distorted version of our normal selves." Even with the scads of published information about the group of diseases we call cancer, the detailed information rarely leaves the medical field, and the general population only gets the trickling facts from cancer patients or those who are curious enough to read the dense language of the medical field. With an accessible work like this, the proverbial hand is open; oncologists should enter the ward to patients who understand what they are about to be told.
Cancer behaves like a human being. We've spent 4000 years trying to understand it, from the Greeks who called it onkos to the men who tried desperately to cut it from the body in the mid-19th century, but like a pariah, it refuses to be put into our box. Common and still hushed-up, cancer is a specter of death that we all hope will skip over us. Only by studying its habits, its life, its very breath, can we ever hope to escape its grip.
The Emperor of All Maladies is still fairly recent and relevant, but you can get the Kindle edition for $13.99 or the paperback for $12.50 from Amazon. Informative, engaging, horrifying and enlightening, this book is bound to be a seminal work on the disease from beginning to end-- only with the full picture can we understand its purpose and its design.
Posted by Unknown at 10:47 PM