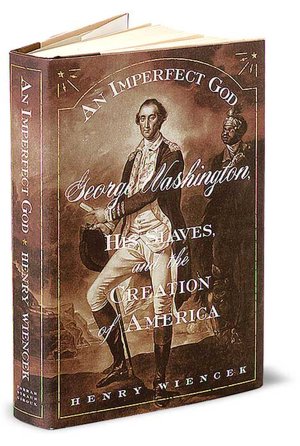 Think back on your elementary school history lessons. Other than the colorful (and notably bloodless) pictures of Gettysburg and the clean, proper descriptions of the Continental Congress, what do you know about our Founding Fathers as people? Most of the things we think about them are fiction, or glorified attributes. The truth of the matter is that they were tradesmen, farmers, philanderers, rebels, subversives, and, most notably, slave owners.
Most elementary school teachers somehow skip that one.
In An Imperfect God, historian Henry Wiencek stops to look closer at the life and occupation of perhaps the most mythologized man in American history: George Washington. With no royalty to idolize, Americans have generation upon generation lifted up the stories of the man with the wooden teeth (they were actually ivory and extracted teeth) who chopped down the cherry tree and had to tell the truth (a composite tale that's only partially true). In fact, the man that George Washington was has been somewhat buried in time and a whirlwind of events, and Wiencek seeks to bring it starkly to light.
The main point of the book is the irony of America: a state based on the purported ideals of freedom while maintaining slavery with a fist of iron. The Constitution "solidified the institution," Wiencek writes. Although the title and face of the book focus on Washington, the real heart of it is to convey the depth of slavery in young America and the double standard that the Founding Fathers lived by.
The book begins in the year of Washington's death, where he decides to make an addendum to his will where all of his own slaves would receive their emancipation upon his death, a shocking breach of protocol for a Virginian plantation owner at the time. By following Washington's meticulous diaries, Wiencek shows us firsthand the struggle that our first president went through within his own rigid moral barriers, trying to reconcile the ideas of the Enlightenment with a creaky, superstitious, inhuman institution like slavery. And yet, his life, his world was centered around it, and one could not pull the rafters from a building and not expect it to collapse. This was the dilemma that Washington faced, and this is the conflict that the book presents us with.
Unfortunately, it's not extremely well organized. The author is in such a rush to present us with his painstakingly researched data that he begins to gush in the very first chapter, bursting at the seams with stories and histories and connections and context. The whole book follows in this theme, sort of like a scatter plot. Washington's life is the median trend of the plot, following him from beginning to end, with bits and pieces of history, culture, and new anecdotes on slavery scattered about. The effect is somewhat confusing, but in the end it conglomerates into a big picture: division.
For the pure purpose of education, An Imperfect God is enlightening, clearing away the cobwebs of myth and idolizing with a proliferation of primary source documents. Washington kept detailed journals and books of finances, down to what he spent on gambling on nights in Williamsburg. He also kept yearly diaries with the markedly unromantic title "Where and How My Time is Spent." No one could accuse him of being flowery. However, Wiencek doesn't just leave it there, with his subject; he has scoured the annals at Mount Vernon and other depositories for letters, records, journals, and exchanges on a host of other subjects, some of which include barely literate slaves who worked at Mount Vernon. Scarcely a paragraph passes without a reference to some obscure historical character, backed up by extensive documentation.
Wiencek is a fine historian, and his work is sure to last, if only for the motivated. An Imperfect God is not written for the passive reader, only cursorily interested-- no, the dense writing and blob-like organization don't make this a golden work of the literature world. But as a historical document, it stands. Raw facts are hard to memorize; people like stories.
Maybe we ought to tell our elementary school kids the truth sometimes, even if it's hard to hear.
This book isn't available on Kindle, which is alright-- I snagged my copy from a dusty corner of the library. You can purchase it from Amazon for as low as $10.50 in the hardback, which is a lovely edition with a group of paintings in the center (including one remarkable one of Washington's cook, Hercules) that I had never seen before. Worth a read if you've got the time, worth a summary if you haven't.
Posted by Unknown at 10:07 PM