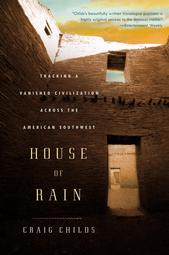 Rain and the desert: polar opposites, at least to most people. Say the word desert in a crowd of people from a temperate climate, and immediately images of saguaro catci, bleached cow skulls, rattlesnakes, sand dunes, and sombreros come to mind. Dig a little deeper, and some people might think of the distant Native Americans, guiltily mumbling about how white people forced them onto godforsaken spits of land that nobody else wanted. What might surprise the average observer is that those people (the Apache, the Navajo, the Hopi, the Zuni, and many others) have lived in those lands for thousands of years and love it like their own blood. It may be harsh land, but it's their heritage.
Craig Childs's expose on the world of the Anasazi (or, more properly, the ancestral Puebloans) dispels many of the cliche tourist assumptions that Americans may have about the previous owners of our land. With a slow, respectful voice in deference to the secrets of the world around him, Childs quietly follows in the footsteps of a people who left their worlds behind them as a manner of living, tracing their history through only broken pots and tumbled walls.
House of Rain is a bifurcated novel: the main "story" follows Childs's physical pilgrimage across the migratory trails of the pre-Columbian Anasazi, and as he uncovers ruins and artifacts, he divulges his wealth of accumulated archaeological research. He begins in the New Mexican Chaco Canyon, where a great religious and commercial civilization flourished over a thousand years ago. He introduces us slowly to the terminology and basic architecture that these people used, then moves on to the next site at Fajada Butte, taking us along a journey that has long been misread, dusted over and ignored in favor of a more mysterious, though ultimately incorrect, theory.
According to popular mythology, the Anasazi were a people that lived in the Four Corners area of southwest Colorado and northeastern Arizona, constructing the impressive sites of Mesa Verde and Kayenta. On a visit to Mesa Verde, an ordinary tourist will be taken down into some of the breathtakingly complete and preserved cliff dwellings, leaning down into kivas and beholding intact wooden ladders from the 13th century. A tour guide will tell them that these people took refuge in the cliffs from an unknown enemy, possibly the Apache or the Navajo, and only occupied these dwellings for 80 to 100 years before suddenly vanishing without a trace. The guides cite the presence of full baskets of food, personal effects, and ceremonial artifacts as evidence that the people had no chance to collect themselves before disappearing.
This is not the truth, according to Childs. His research and experience have shown him time and time again that the Anasazi were a migratory people, who regularly used a pattern of abandoning structures and following the rain and drought cycle to preserve their way of life.
With extensive research and remarkable personal physical effort, the author takes us on a visceral, sensitive walk along a road that people traveled long ago, tracing the footsteps of a people not entirely gone. Along the way, he makes the point that there still are descendents of the ancestral Puebloans along this road: the Hopi still occupy their ancestral lands, the Navajo are linked to the mountains of their reservation, and people in the Paqime region of northern Mexico are familiar with the migrants' history. They are not gone, Childs concludes; they are simply dusted over with the passage of time.
His own journey drives this point home. Childs is no droll scientist sashaying into writing: his voice is clear, piercing, and in some places moving, bringing to life the dusty places that he stands. His passion for archaeology and the American Southwest pervades the novel, imbuing the words with a meaning other than simple information. That is the true beauty of this book: it is not just a dry recitation of facts. By throwing himself completely into his work, Childs has brought a possibly boring topic to life, enabling his findings to draw in even casually interested readers into a long-lost tale of a people long forgotten.
Although he does stray into sometimes long and dull passages rife with tangential information, the author never loses track of where he stands. One interesting and possibly unintentional beauty of the book is the fact that he brings his wife Regan and toddler son Jasper with him on parts of the adventure. Perhaps it was practical and coincidental, but by bringing such vivid pictures of life into these places long dead, he illustrates a point: the cycle goes on. Even if a civilization vanishes, life has not ended, and there will always be people chasing the rain, adjusting their lives to what is given.
Fascinating, comprehensive, and understandable even for a stranger to archaeology, House of Rain's 445 pages are a fantastic trip through a land that few modern Americans see: the bare deserts of the central Southwest. This book is available for $9.99 on the Kindle or $10.87 in paperback from Amazon, but because it's about five years old, it might be available in your local library. Go and take a look, because dispelling rumors is one of the most valuable things that an author can do. Sharing the truth is a great facet of history.
Posted by Unknown at 9:06 PM